Here is the 'letter' from the father of my first student for 2019 given to me on my request. I have decided to ask for such a letter when a parent comes to see me and then ask for another letter at the end of the tuition.
5.1.2019
To: Mr.Luqman Michel,
My son, Emmanuel Chin, is pre-diagnosed with dyslexia. I have met Dr. Fauziah from Gleneagles and she asked me to consult Dr. Atiqah to do an IQ test before Dr.Fauziah can certify him as dyslexic.

At the age of 10 this year, Emmanuel still can’t read and he writes very show. In school, last year he has been ostracized by the teacher and he sits alone at the back of the classroom. The teachers are just helpless and do nothing to help him.

As a parent, I tried to find a solution but had not many options available. A friend suggested that maybe Mr.Luqman can help. I googled his name and came to know that he teaches dyslexic kids. He also authored a book entitled ‘Shut down kids’.

I decided to send him a Messenger message. The reply was prompt and that led to our appointment the next day. I brought Emmanuel to Mr.Luqman’s house and had him assessed by Mr.Luqman.

He has the opinion that Emmanuel is a ‘shut down kid’ instead of dyslexia. Immediately, I made 3 appointments per week for Mr.Luqman to coach him personally.

I can only hope and pray that Emmanuel will discover himself in reading in 2 to 4 months time as suggested by Mr.Luqman.

My note: I don't do any scientific assessment. I just ask a few questions and conclude if a child is a shut down kid or has some acuity problem (sharpness or keenness of thought, vision, or hearing). Once I conclude that the child is a shut down kid I tell the parents that I will get the child to read at grade level within four months. I now prefer to say, 30 lessons instead of 4 months as many lessons are missed due to extra classes in school as is the case with Emmanuel.

As I have mentioned several times, the term dyslexia does not have a scientific definition and in addition a parent has no clue as to what to do after the 'diagnosis'.

My term 'shut down kid' is a kid who has disengaged from learning to read due to confusion as a result of being taught wrongly.

Here is a photo of the transcript above. 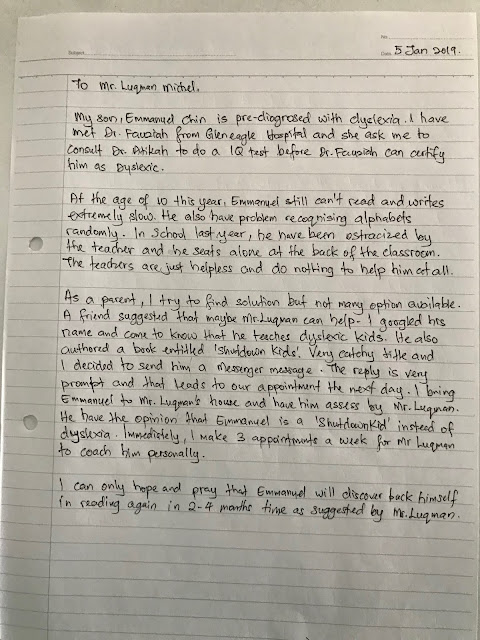